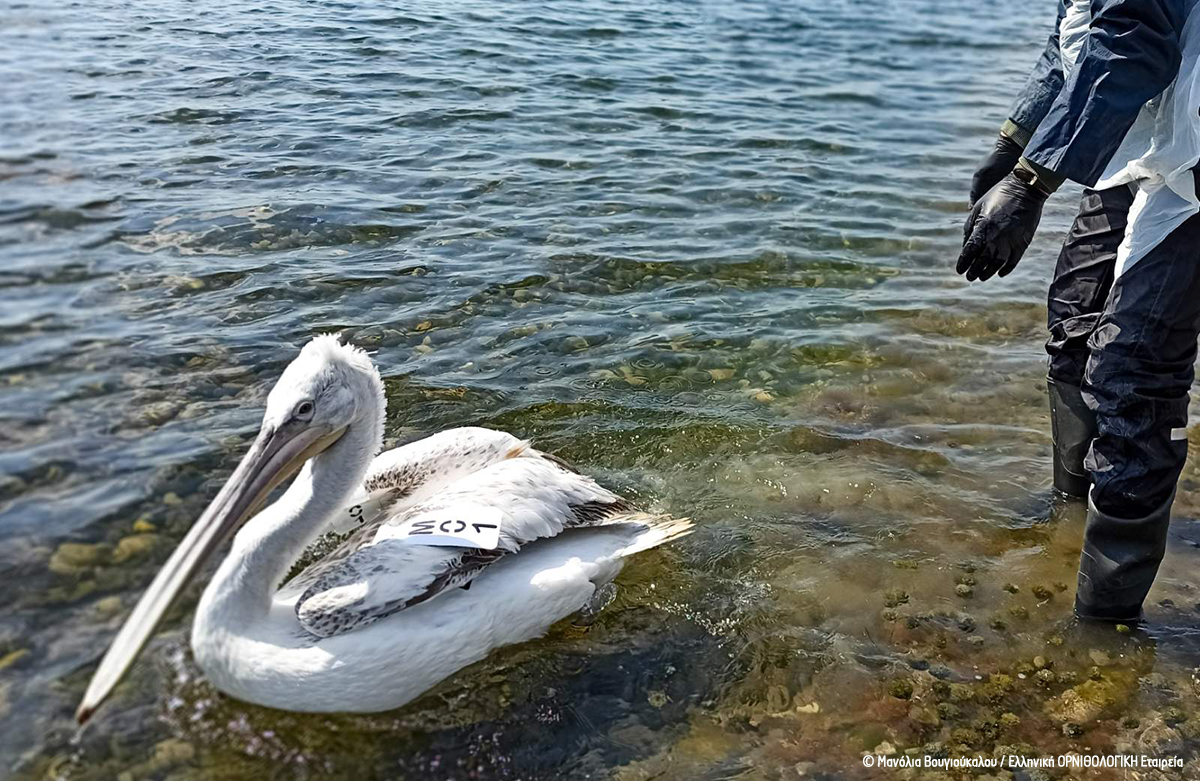 “Maestros”: the first Dalmatian Pelican with a satellite transmitter in western Greece

A mission for tagging Dalmatian Pelicans was successfully carried out by HOS/BirdLife Greece in the National Park of Messolonghi lagoon, under the Pelican Way of LIFE project. The mission was organised in collaboration with the Society for the Protection of Prespa and the Messolonghi Lagoon Management Body.

“Maestros”, the first Dalmatian Pelican tagged with a satellite transmitter in Western Greece, was named after the north-western wind (mistral) that was blowing during its tagging.  In the following days, the data from the transmitter showed that the pelican was feeding in the eastern and western parts of the Kleisova lagoon. The bird also visited the salt works of the same area. Data collected by the transmitter will provide us with valuable information about the Dalmatian Pelicans’ movements around the year as well as the geographical range in which the birds feed outside the breeding season. The data will also allow us to confirm whether the Messolonghi colony is connected to the one in the Amvrakikos bay.

With the breeding season already under way, the team ringed 20 Dalmatian Pelican chicks while approximately 150 nests were counted in the area. Furthermore, according to information provided by the Dalmatian Pelican Patrol System, implemented in the area by HOS, so far no incidents of disturbance have been observed either in the Amvrakikos’ or the Messolonghi’s colonies.

These are encouraging news, since Dalmatian Pelicans need to remain undisturbed until the end of the breeding season, which is around the end of June. In cases of disturbance, there is always a serious risk the birds will abandon and/or destroy the eggs in their attempt to avoid being disturbed.

It is also a positive fact that no mass death of birds that would indicate a bird flu incidence in the area have been recorded as it happened recently in wetlands of Northern Greece where incidents of mass deaths of birds have been confirmed to be due to bird flu.

Dalmatian Pelicans are one of the two pelican species visiting Greece. In the Small Prespa Lake they form their largest colony in the world, while other colonies of the species can be found in Lakes Kerkini, Karla and Chemaditida, in the Amvrakikos Bay and in the Messolonghi Lagoon.

The first nesting of the species in Messolonghi, was confirmed back in 2011.

Call to residents and visitors of the Messolonghi Lagoon and Amvrakikos’ wetlands areas:

In case you come across ringed Dalmatian Pelicans, please contact HOS, making sure to include information about the location of the sighting, the ring number as well as photographs of the bird(s) observed. You can contact us via:

The LIFE Project «Pelican Way of LIFE» (LIFE18 NAT/NL/000716) brings together seven partners from five countries who aim to implement conservation actions for the Dalmatian Pelican (Pelecanus crispus) in Europe and internationally. The Project will run for five years (09/2019 to 03/2025) and will be implemented in 27 Natura 2000 sites in Romania, Bulgaria, Greece and Ukraine, while supporting actions in Turkey, Albania, Montenegro and the Republic of North Macedonia. The project is coordinated by Rewilding Europe and in Greece the Project’s actions are implemented by HOS/BirdLife Greece.